A few years ago I started writing special blog posts for Remembrance Day. My second one focused on my Great Uncle Grenville, an RCAF Flight Sergeant who was a wireless operator and air gunner on a Halifax bomber.

This summer I was privileged to make a trip to Belgium to visit Grenville's grave and attend the unveiling of a memorial at the site of his plane crash. This was definitely a once in a lifetime opportunity and one in which I was honoured to participate.

The architects of this commemoration were the wonderful people of the Wings Museum in Sussex, England. They've developed a partnership with some local history buffs in Belgium and have been working for years on researching RAF crash sites, and this is now translating into searching for family members of the airmen and unveiling memorials in their honour. As we in the museum field know, they don't do this because they get paid the big bucks. They do this because they are passionate about aviation history and have a great respect for the many airmen who fought for our freedom.

I knew as I prepared for the trip that it could be a moving experience. Even though Grenville died 70 years ago, I've heard stories and seen pictures and understand how devastated my family was when they heard news of his death. But I didn't expect it to be such a powerful experience. Upon arrival we met the family of another crew member and mused that our uncles were buddies so long ago and now we were carrying on that connection. In the morning we were given copies of the account of the final flight by one of the two survivors of the crash. The room quieted as we passed the pages around to read. Suddenly it was real. It wasn't just a family story. It wasn't just some young guy in family photos. This was a group of men who were in crazy circumstances fighting for their lives and the lives of others. We finally had answers to the 70 year old family mystery of what really happened that fateful night.

As soon as we stepped foot on the crash site, I felt a lump forming in my throat. As Marcel described the plane's final descent we felt transported back in time, hearing the roar of engines and gunfire as it exploded and crashed. This was the place where my family was crushed by the loss of a son and brother. Rather than the memorial unveiling being a quiet, intimate affair, the entire town came out to pay their respects. They didn't know us, let alone our relatives who were on that bomber in 1943. And yet they came and listened to the account of the final flight and did their best to chat even though none of us spoke Flemish. They smiled and applauded as I tearfully rambled on in English about how appreciative we were for all that they had done to honour our uncles. When the planned military flypast fell through because the planes were called to duty, local pilots stepped in to pay this respect to the lost crew. 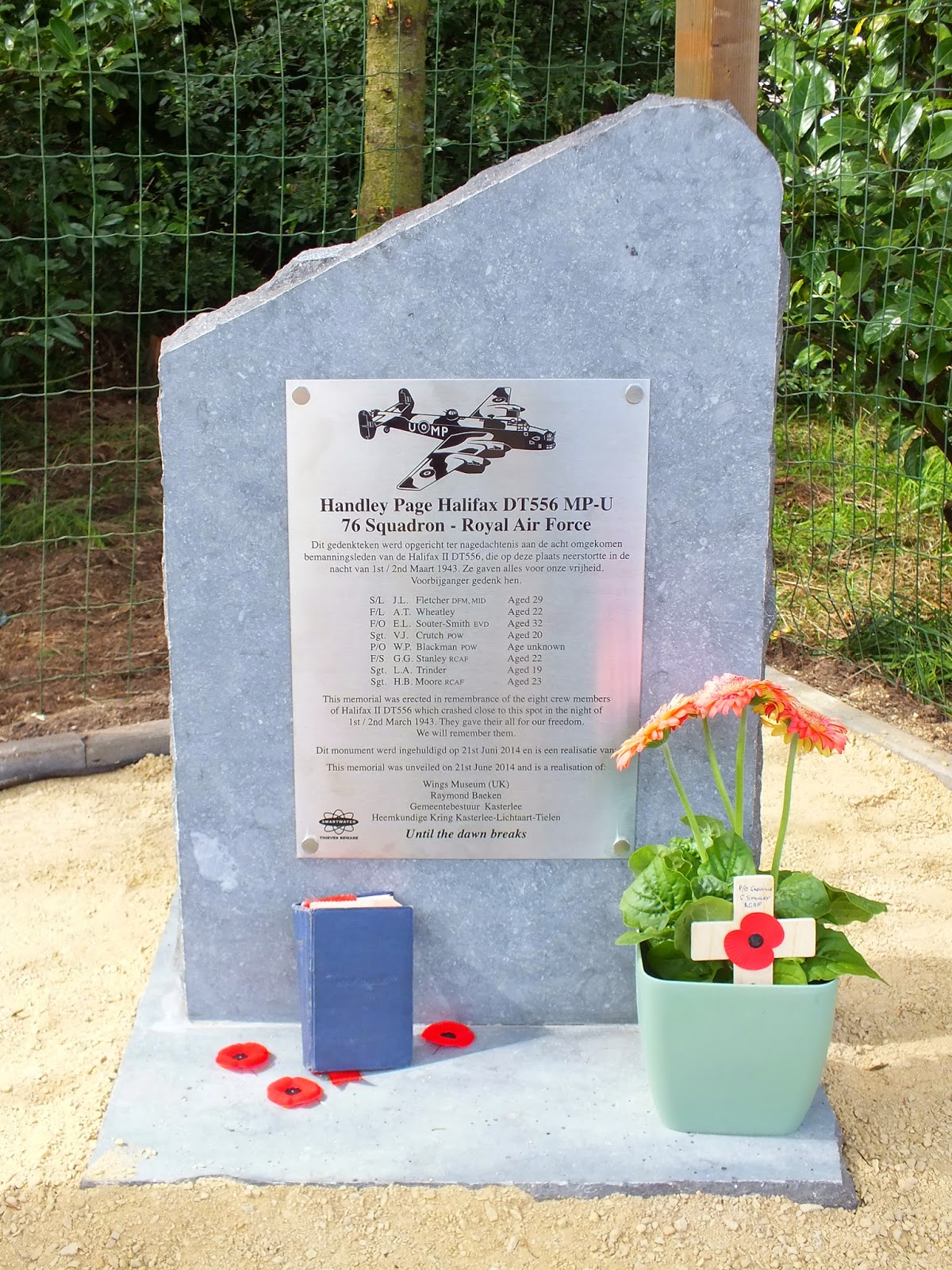 One of the things that struck me about the trip was the way Belgian history was so real to the people. It didn't matter how many years ago something occurred, they could tell you amazing tales of their past. And this makes sense when you think about it. From the Canadian perspective, men and women left home to fight, and not all of them came back. But in Europe, events were unfolding all around. It happened in their backyards and in their skies. I asked several people how they manage to keep this appreciation for history alive, especially when we're talking about the world wars of 70 and 100 years ago. Every time I got the same answer in slightly different words. "This is what we do. We will never forget."

As I traveled the province this summer visiting community museums, I saw numerous exhibits honouring local WWI veterans, and heard about many commemorative activities that the museums either coordinated or took part in. Singalongs of WWI songs and hymns, special services of remembrance, reading of letters sent home from the front...lots of examples of respectful acknowledgements of the sacrifice paid by Nova Scotia's men and women 100 years ago. And what every museum worker told me was that these activities were far more powerful than expected. People got emotional as they thought about their relatives of years gone by and of the men and women who didn't get to come home. The museums' work made a war from 100 years ago real and relevant. Battles fought overseas in places never visited became real. Grief that had been buried for years and generations resurfaced.

This is the kind of work that museums should be doing. Going beyond the exhibits to provide opportunities for personal connections, opportunities for healing, and greater understanding of life in general.  We should adopt the Belgian mantra for our own: This is what we do. We will never forget.

We've been talking about this for quite some time, and it's finally time to announce that our data dictionary & error reporting tools are finished and in CollectiveAccess.
When we switched databases, one of our goals was to find a more user-friendly system that wouldn't rely so much on ANSM support. It needed to be more intuitive. Now after a few years in CollectiveAccess, we're building in even more tools to guide our users in the data entry & documentation process. 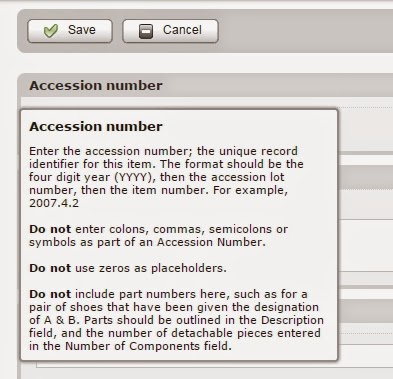 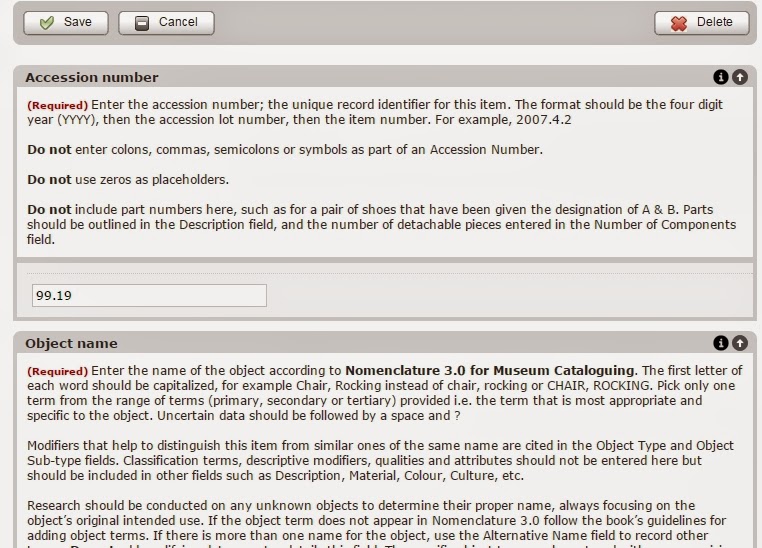 The data dictionary from our old database was incorporated into CollectiveAccess, but last winter it was completely overhauled and updated. Again, our goal was to have the system remind you of the standards of practice, provide definitions of every field, and even warn about common mistakes.
There are two ways to access the new help text. The first is to simple mouse-over the field name. A box will pop up with the info and will leave again when you move the cursor away from the field name. No muss, no fuss. Perfect for a quick reminder.

The second way to access the info is to click on the little "i" button at the right hand side of the field name. This will bring up the exact same help text, but rather than it disappearing on you, it will just stay on the screen until you click the "i" again. This is a great training tool for summer students or new staff or volunteers. They can compare what they've entered with the examples in the help text and easily assess their work. Important fields even have a little red required notation in the text. 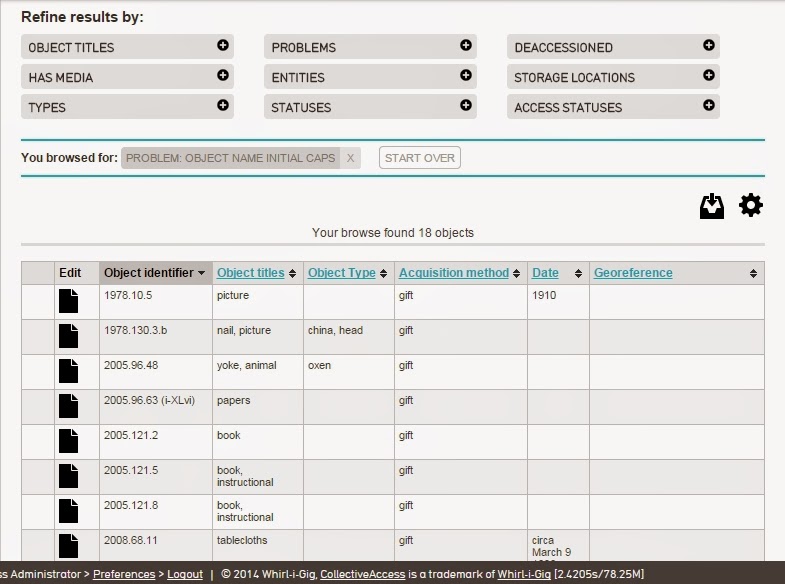 Error Assessment
This is really cool. At least I think it's really cool. One of the issues in database work, especially if you're new to a museum, is knowing where to start. We all know there are problems that need fixing, but how do you find those problems without wasting a whole lot of time? Well, this is where our new browse button comes into play. When you go to Find - Objects - Browse, you'll notice a new option: Problems. Yup, no pussy-footing around it. Your database has some problems.
There are a number of "problems" that we've identified and told the database to flag. Clicking on the problems button will show you the list, and then you can select any of them to get your list of records. From there it's just a simple matter of working through the list. Once a record it corrected it will disappear from the list, and once there are no problems of that type, you won't see it as a browse option. 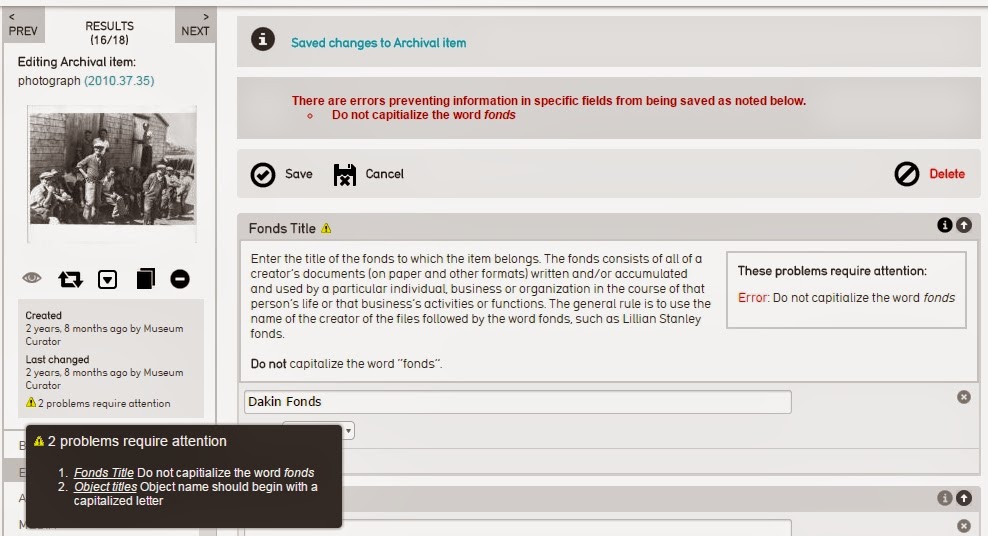 When you go into one of the problem records, you'll notice a few new details. First, we have the lovely yield sign alerting you to the number of problems requiring attention. If you scroll over the yield sign it will expand on the issues. You will also see yield signs in the problem fields themselves. Clicking on the i for info button will provide you with the help text for that field and alert you to the problem requiring attention. If the problem is deemed serious, you won't be able to save the record until it is fixed. However, sometimes you will just receive a warning to look something over because it could be a mistake.

So that's what's new. Enjoy the new tools and I hope you'll find them helpful.
Posted by Karin at 9:30 AM No comments: