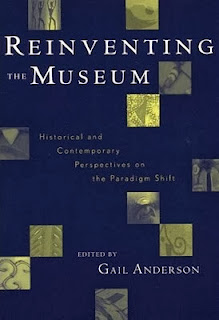 Well, it has once again been a very long time since I delved into our reference library and did a book review. This time I've pulled out a nifty anthology edited by Gail Anderson - Reinventing the Museum: Historical and Contemporary Perspectives on the Paradigm Shift, published by AltaMira Press in 2004. As with any such anthology, sometimes a statement or viewpoint will make you cringe or go "WHOA! They were so far off with that prediction!" But overall, these are the people who have shaped the museum field, and they had/have lots of great things to say.

I'm not going to spend my time going into detail about the contents as someone else has very ably reviewed the book and focused on its contents. Instead I thought I'd focus on a number of quotes that jumped out at me. If they don't whet your appetite to read this, I don't think anything will.

Alma Wittlin, in her article on museum renewal, drew attention to John Gardner, who "is credited with having stated that "most ailing organizations have developed a functional blindness to their own defects. They are not suffering because they can't solve their problems, but because they won't see their problems."'

Duncan Cameron called us to action: "Where museums, be they of art, history, or science, have the knowledge and the resources to interpret matters of public importance, no matter how controversial, they are obliged to do so."
He also gave us a grave warning: "Museums and art galleries, like the majority of other cultural institutions, must institute reform and create an equality of cultural opportunity. Society will no longer tolerate institutions that either in fact or in appearance serve a minority audience of the elite."

For anyone who has attended our Museums 101 workshops, we talk about the "five functions of museums", which has been an accepted museological concept for the past 40 years. The functions include collecting, conserving, researching, interpreting and exhibiting, and almost always show up in museum mission statements or mandates. Well, Stephen Weil figures it's time to simplify that: "The essential functions of museums are reduced to three: to preserve (to collect being viewed as simply an early step in that process), to study (a function that remains unchanged) and to communicate (this third function being a combination of...to interpret and to exhibit)."
When we think about our online activities via social media, NovaMuse.ca, the Virtual Museum of Canada, and other avenues, are we not communicating truths that have been preserved and illuminated through study?

Harold Skramstad focused more on the educational aspects of our work: "The closely controlled environment of the school, open during very limited hours and not available to all members of a family or community-based group, cannot match the environment of the museum for encouraging groups of all kinds to learn together."

Lois Silverman continued with the theme of education and interpretation: "...the paradigm itself broadens our notion of the museum educator's role to be one who is knowledgeable in the ways people make meaning of objects and skilled in facilitating dialogue and negotiation."

Stephen Weil had a lot to say on the relevance of museums in today's society: "...a museum's collections - which might once have been thought of as its 'end' - can now be seen as a 'means', as an instrument for the achievement of a larger end and simply one among a number of resources that the museum can employ to carry out its service obligation to the public."
He also cautioned that "...a museum may only be considered essential so long as its impact is perceived to be both valuable and incomparable."

Will Phillips' article was one of my favourites; full of great reality checks: "Organizations that are not exploring and using [new technologies]...will move more and more slowly at higher and higher operating costs."

Robert Janes wrote on the subject of leadership and the future of the field: "Simply put, patriarchy and control foster isolation; while individual responsibility and stewardship nurture the web of community relationships."
Perhaps his most blunt statement: "Are there too many museums? In short, yes there are."

So there you have it. If you've been working with museums for 20 years or more, you should probably read this book. Or if you're new to the field and want to learn more about the evolution of museums, this is a great place to start. I guarantee it will help you understand how and why certain changes have taken place, and give you solid suggestions about how to adapt to current realities. These great thinkers were not afraid to tell it like it was/is. There's no sugar coating, just a serious analysis of our profession. I like that.
If you want to read another book review that goes into detail about the book's contents, click here.
Posted by Karin at 9:30 AM

Sounds like an honest and interesting read. Maybe I will venture over to the non-fiction world and try it out.