Every once in awhile my site visit schedule allows me to attend local events.  One of my favorite events this year was the ghost tour of Sydney's historic north end.  I don't usually go in for all that paranormal stuff, but when Peyton extended the invitation I figured it would beat hanging out in a hotel room all night.  Anna MacNeil joined me for the tour, which was a great chance for us to get to know each other better since she is the newest member of the Information Management and Access Committee. 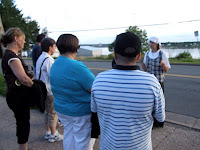 The tour begins at St. Patrick's Church where the guide talks about the church being built on top of a graveyard and bodies being discovered during renovations.  And since it's a ghost tour, we heard all about various spooky experiences that people have had in the building.  From there we walked through the streets, learning about an old military base where soldiers experienced forerunners, houses of ill repute where soldiers got into trouble, and murder plots and executions.  We also learned about homes with basements that were converted into prison cells, and how previous and current owners have dealt with these interesting spaces and the interesting occurrences that seem to accompany them.  I also heard the story of Moxham Castle, a seemingly cursed property on which the hotel where I was staying now stands (complete with many tales of frightened staff and visitors).  So needless to say I spent the rest of the evening sitting in bed and waiting for something creepy to happen.

One part of the tour definitely stands out more than the others.  Cossit House is believed to be the oldest house in Sydney, dating back to 1787.  Now part of the Nova Scotia Museum, the house has been restored and furnished in accordance with late 18th century practices.  All that I will say is that by the end of this tour, the hair on the back of my neck was standing up and I was more than ready to get outside again.  Thankfully the tour ended back at St. Pat's (as it is affectionately known), and everyone enjoyed some tea and scones.

On a lighter note, I also learned on this tour that J.R.R. Tolkien's mythical ents aren't so mythical.  As you can tell, this one instructed me to keep quiet, but if you go wandering through the streets and keep your eyes peeled, you may notice that you're being watched.

So the next time you're in Sydney during the summer, be sure to check out the Ghost Tour hosted by the Old Sydney Society.  I promise that you won't be disappointed.
Happy Halloween!
Posted by Karin at 2:41 PM No comments:

Email ThisBlogThis!Share to TwitterShare to FacebookShare to Pinterest
Labels: travels

It is with great sadness that I announce the passing of a wonderful colleague and friend, Jim McLean, who passed away on Sunday after a 16 month battle with cancer.  Jim's wife Rilla has been an active member of the Port Hastings Historical Society for many years and so once he retired, he was recruited.  At special events he could be seen with a camera hanging around his neck, quietly documenting the goings-on.  Having worked with computers and databases for much of his career, he found a natural fit with the Passage Project and took over its administration at the Port Hastings Museum & Archives.

Jim has been a member of the Passage Steering Committee (now the IT & Collections Management Advisory Committee) for the past two years.  In addition to serving as our Cape Breton representative, Jim was our technical expert.  Whenever any questions came up about the database system or how we should move forward, he was there with an answer.  He was the instigator for our most recent system updates, and was looking forward to helping develop our new database system.

When Richard and I first met Jim in 2007 we were surprised and very impressed with how much he knew about computers and databases.  Jim was such a fount of knowledge that we knew he would make a great addition to the committee.  He understood the importance of having good information in-house, as well as sharing the museum's information with the general public.  Not only did he come to the table with great ideas, but he wrote several research documents for us on museum database systems.  He made certain to do his homework before he would make any recommendations, but we found more often than not that his many years of database experience with Stora enabled him to answer whatever questions we threw at him.

When he first called to tell me about the cancer diagnosis, Jim didn't seem that concerned.  He assured me that everything would be fine and he didn't want or need to step down from the committee.  Even though he was undergoing treatments he would Skype in to meetings and made sure to provide input on various initiatives.  He even attended a dinner meeting in April when we were in Port Hawkesbury for the conference.  Jim remained positive and maintained his sense of humour throughout his ordeal.

On behalf of the IT & Collections Management Advisory Committee, and ANSM as a whole, I extend our deepest and most heartfelt sympathy to Rilla and the rest of Jim's family and friends.  He has definitely left a hole that can never be filled.  We'll miss you Jim.
Posted by Karin at 11:56 AM 5 comments: