After a recent discussion with Tinisha at the NS Sport Hall of Fame, I asked if she would be interested in sharing her work with the rest of the province. Why? Because these guys are an example of how far a museum can come in a relatively short period of time. Tinisha was hired to do some clean up work, to get things organized. I am genuinely amazed at how much she and her team has accomplished and thought it would be worthwhile to share the story with the rest of the class. So without further ado, here is Tinisha:

Since the summer of 2010 the Nova Scotia Sport Hall of Fame has been undertaking a project to digitize its collection. The goal was to give every artifact record a photograph. At the start of the project, there were a little over 5000 catalogue records in the database and we believed that the entire collection had been accessioned and catalogued.
After the project began, we realized that this was not true - the entire collection had not been accessioned and catalogued. This realization initiated an expansion in the number of catalogue records in the database and, consequently, the size and length of the project grew. Also, off-site storage needed to be reorganized and artifact location records had to be updated due to the relocation of the museum some years earlier.

Once we had inventoried the entire collection and digitized the majority of it, the number of database records exceeded 8000, equivalent to a collection growth of over 60 per cent.
This, however, was not an accurate reflection of the size of the collection. There were many duplicate records in the database. We are now working on reconciling these records, estimating that the total number of records/objects in the collection will be closer to 7000 when we are done.

The proper paperwork and policies had fallen out of use or out of date in the past. So, in 2010, proper paperwork such as deed of gift (donation) forms, loan forms, and policy and procedures were created or updated immediately to ensure all further paperwork was done properly and to national standards. Currently, we are also going through our old donation forms and catalogue worksheets to ensure that all the information from them was transferred to the database.

Our current goal is to have all the records reconciled and have an image attached to each in time for the estimated launch of the public database in September.

Other accomplishments to date include:
·         Improving artifact storage, increasing the safety of the artifacts (and staff)
·         Putting all photographs in archival plastic sleeves (about 40% collection is photographs)
·         Switching many of the exhibit lights to LEDs
·         Starting environmental monitoring (temp & humidity datalogger)

Other objectives for the summer include:
·         Testing out Google Maps and HistoryPin opportunities
·         Building education displays for our travelling education program
·         Creating new exhibits
·         Rehousing our textiles
·         Producing an Emergency Preparedness Plan 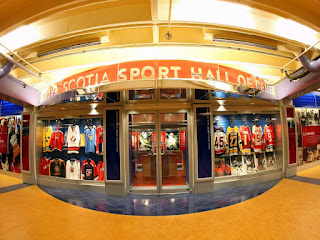 Do you have a really great project that you'd like to share with your colleagues? If so, drop me a line.

Email ThisBlogThis!Share to TwitterShare to FacebookShare to Pinterest
Labels: tips